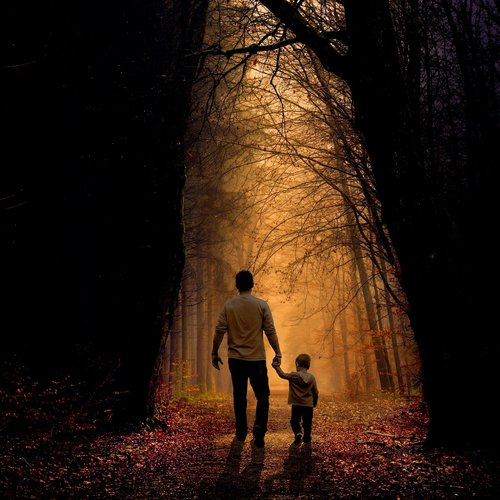 Just One Thing – Being a Stay at Home Dad

My work is fairly mum-focused, largely because it’s more often mums that I work with (as women are far more likely to seek therapeutic support then men). But of course partners also go through an enormous transition when they become parents, and all too often their contribution is reduced to a sidenote. How many laughs have been had at a partner who is made into the comedy sidekick panicking at the idea of changing a nappy? If parenting is to be valued, then both parents need to be heard from.

So I spoke to John Adams, founder of DadBlog, who is a stay at home dad and campaigner for accessible shared parental leave. John is married to Gill and together they have two daughters: Five year old Izzy and nine year old Helen. John left his former career in PR and communications in 2011 to become his daughters’ main carer and run the household while his wife works full time.

His ‘Just One Thing’? “Have confidence, and make mistakes”.

I never quite know where to start when asked to write about my experiences as a man who is the main caregiver to his children. There’s so much I could say!

So as to keep things concise, I’ve decided to put this in list format. In no particular order:

It is a lonely experience

Yes, social isolation is a massive issue for mums. I would never argue otherwise. For stay at home dads, the issue is acute.

Think about it. Men very rarely become stay at home dads from day one. Usually mum has taken an extended period of leave from work because she is breastfeeding. Before the birth and during her leave, she is socialising with women from her pre-natal classes and building up strong social links.

Women receive constant messages that they need “mum friends”. Mums socialise with each other, along with their kids, and dad gets excluded.

I’ve had women say to me that they know stay at home dads and that they often invite mums round for coffee etc. They simply don’t invite the dad, well, just because.

The saddest part of this is that you can see the mums socialising with each other along with their kids. Your kids get left out. This is probably the hardest issue I have had to contend with.

Back in 2015 the old maternity and paternity leave system was consigned to history in the UK. It was replaces by a shared parental leave system and I did some work with the Government to promote the changes.

It’s a great start, but the leave was introduced badly. British working culture simply assumes that mum will take an extended period of leave when she has a child.

The key to getting a man involved in a child’s life? It’s having him involved from day one, ideally from before the birth.

Shared parental leave is an excellent way to make this happen. We have a simple shared parental leave system in place in the UK at this point in time. What we now need to do is introduce a period of leave that is ringfenced solely for dad. This would force employers to accept that men were going to take the leave and, eventually, change our working culture for the benefit of society.

If we want equality for women, we have to accept that men also need equality on the domestic front and as parents. Once men are seen as equals on these two fronts, women will have more freedom in the workplace.

The portrayal of fathers in the media is often poor. We’re often portrayed as feckless or useless.

Did you watch the BBC sitcom Motherland? Did you notice how the stay at home dad was portrayed as effeminate and insecure?

The reverse is true. If you’re male and you’re going to enter a world that is predominantly female, you have to have confidence. It’s the only way you’re going to get through this.

It is a blessing

I feel genuinely blessed to spend so much time with my kids. It’s an experience so few fathers have.

Looking after young children is relentless. There’s no escaping that, but no one has ever died saying they wished they’d spent more time at work.

In fact, there’s a story I have about George the builder, this guy was in his sixties and did some work to our house when we first moved in.

When we hired George, I was always at home with our eldest daughter while my wife was at work. One day I thought I’d better explain the situation.

Considering his age and stereotypically masculine occupation, I didn’t expect a warm response. Instead he looked skywards and said: “I wish I’d been able to do what you’re doing. I didn’t see my kids growing up.”

If there’s one thing I have noticed, there’s an obsession with dads looking after pre-school kids. Instagram, Facebook, newspapers, magazines are full of photos and articles about men with babies. I appreciate it makes for a good photo, but that’s a small part of the parenting journey.

I hate to break it to you, but those babies grow up. My youngest daughter started school last September. I have more time now to concentrate on my blogging and freelance work but I remain Helen and Izzy’s main carer. I do the school run, cook their evening meal, sort out school uniform, deal with the PTA etc.

I’ve moved on to new challenges. It’s no longer about potty training but online safety, homework, friendship problems and I’m gearing up from Helen starting puberty, something that will happen soon enough.

Just one thing: Have confidence and make mistakes

As a man, you will probably hear people making comments about childcare being women’s work. If you hear that message often enough, you might begin to believe it.

Childcare Is not just women’s work. Have confidence in your abilities. Yes, you are going to make mistakes. So what? Every mother and father does. Accept this and you are 90% of the way there.

Most importantly however, enjoy your journey as a parent. There will be bad times and good times, trials, upheavals, dramas and many, many happy memories. Simply do you best.